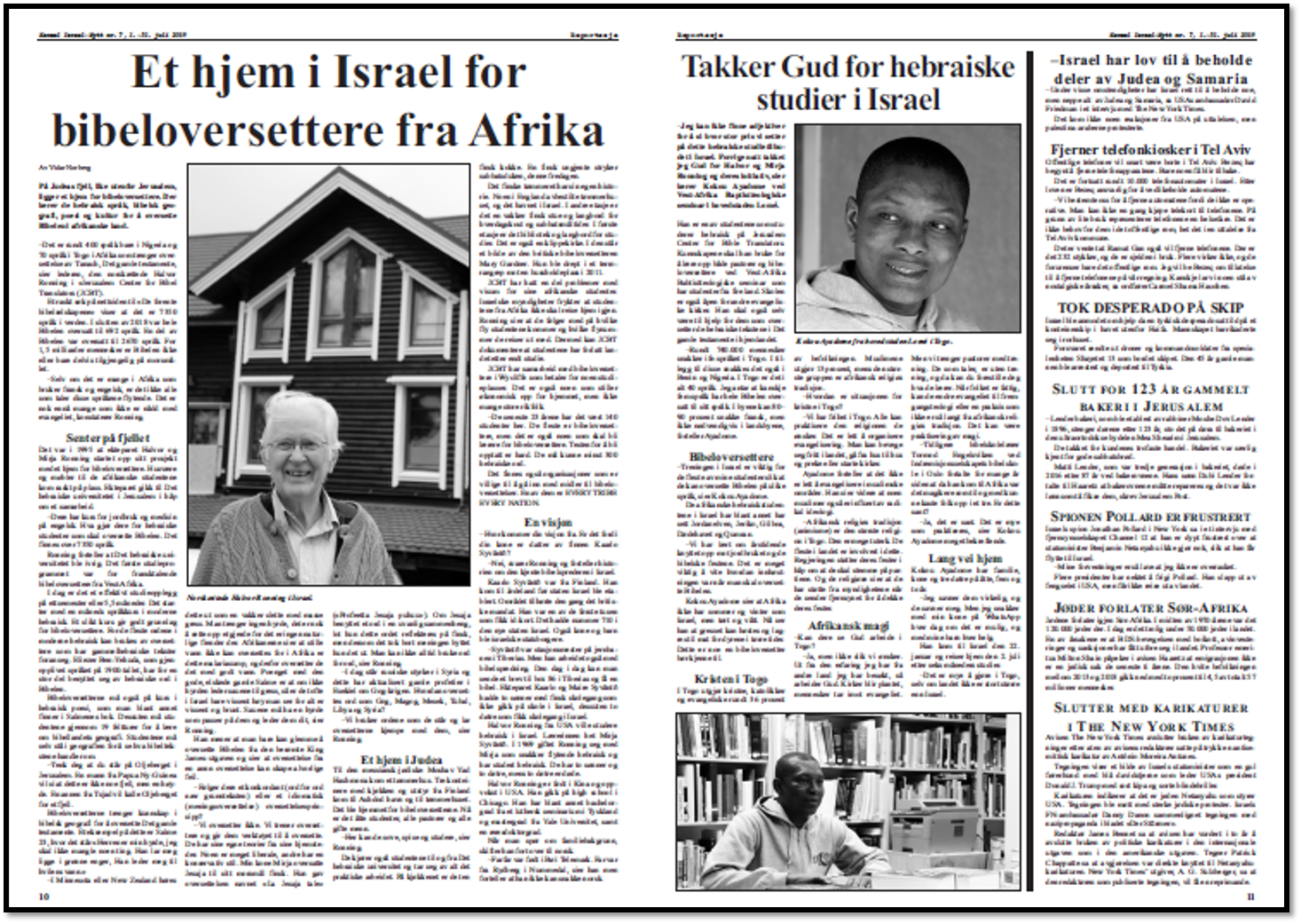 JCBT had a large spread in a Norwegian newspaper featuring the translators from Semester 2019. The following is the English translation of the original segment.

In Judea’s mountains, just outside Jerusalem, is the home for Bible Translators. There, they learn the Hebrew languages, Biblical geography, poetry, and culture so that they could translate the Bible in African countries.

“There are about 400 languages ​​only in Nigeria and 70 languages ​​in Togo, Africa, that need the translation of the Tanach(the Old Testament)”, says the leader, the Norwegian-based Director of the “Jerusalem Center for Bible Translators”(JCBT), Halvor Ronning.

A quick search on the “United Bible Society” website shows that there are 7350 languages ​​in the world. By the end of 2018, the entire Bible had been translated into 692 languages. Part of the Bible was translated into 2670 languages. For 1.5 billion people, the Bible is not or only partially available in their native language.

“Although there are many in Africa who use French and English, not everyone speaks these languages ​​fluently. There are probably still many who have not heard the gospel”, Ronning notes.

Center on the mountain

It was in 1995 that the married couple, Halvor and Mirja Ronning, started their project, known today as the Home for Bible Translators. Housewares and furniture for the African students quickly came into place. The couple went to the Hebrew University of Jerusalem in the hope of a collaboration.

“They have courses in agriculture and medicine in English. But we asked them, What do you do for Hebrew students who are going to translate the Bible? There are over 7350 languages.” Ronning says that the Hebrew University was eager. The first study program was for French-speaking Bible translators from West Africa.

Today it is an effective study program of one semester or 5.5 months. It starts with a one-month language course in modern Hebrew. Such a course provides a good foundation for Bible translators. For most words in modern Hebrew can be used by translators who have ancient Hebrew texts in front of them. Eliezer Ben-Yehuda, who revived the language of the 20th century, has largely made use of Hebrew words in the Bible.

The Bible translators must also take courses in Hebrew poetry, such as the course on the book of Psalms. In addition, students will have to go through 19 field trips to learn about the geography of the biblical land. The students themselves have to stand in the geography itself to see what the Bible texts are about.

“An example of this is Psalm 23, which says, The Lord is my shepherd, I shall not lack anything. He leaves me in green meadows, He leads me to the waters of rest. In Minnesota or New Zealand, this sounds like a beautiful lot of grass. You do not need a shepherd, it is enough to set up a fence because there are no natural enemies there. The Africans say that מֵי מְנֻחוֹת can not be translated into a literal meaning for an Africa reader since they will immodestly think about this as malaria swamp and therefore the translator translates it as “good water“. The point of this good, beloved old Psalm is that Israel, like the sheep, must have a shepherd who looks after them and leads them to the safe place”, says Ronning.

He believes that one cannot simply forget about the original biblical languages and translate the Bible from the famous King James edition. Ronning says that translation from another translation can make serious mistakes.

–Do you follow a concordant (word for word near the basic text) or an idiomatic (meaning translation) translation principle?

“We do not translate. We train translators and give them the tools to translate. They have their own theories from their homes. Some are very liberal, others have a conservative style. My wife Mirja translated Isaiah into her native Finnish language. She gave the translation, named “Let Isaiah speak” (“Profeetta Isaiah puhuu”). If Isaiah used a word in an unusual context, she let that word be reflected in Finnish, but if it takes away the meaning, she replaces it. You can’t always use a word for word approach,” says Ronning.

Today, Russian forces are in Syria and this has actualized the old prophecies from Ezekiel about the Gog war. How are words like Gog, Magog, Mesek, Tubal, Libya and Syria translated?

“We use the words as they stand and let the translators fight with them”, says Ronning.

A home in Judea

To the Messianic-Jewish Moshav Yad Hashmona came a log house. Three containers with kitchen and equipment from Finland came to Ashdod’s harbor and to the log house. It became the Home of the Bible translators. Now there are eight students, all pastors, and all married men.

“Here they can sleep, eat and study,” says Ronning.

They also drive the students to and from Hebrew University and take care of all their practical needs. In the kitchen, there is a Finnish chef. A Finnish teenager provides the Sabbath cloth, for the Friday evening meal.

The Finnish timber has its own history. Someone in England canceled his order for the log house, and it ended up in Israel. On the second floor, there is a beautiful Finnish living room and a long table for everyday meals and Sabbath meals. On the ground floor, there is a library and a long table for study. There is also a rock hall. In it stands a picture of British Bible translator Mary Gardner. She was killed in a terrorist attack against a bus stop in 2011.

JCBT has had some problems with visas for their African students.
Israeli authorities fear that students from Africa will not return home. Ronning says that they keep track of which aircraft the students come to and which flight numbers they travel with. Thus, JCBT can document that the students have left the country after graduation.

JCBT cooperates with Bible translators in Wycliffe who pay for some study places. There are also some who donate to the Home, but not many great rich people.

Where does your vision come from? Is it because your wife is the daughter of Finn Kaarlo Syväntö?

“No,” Ronning answers, telling the story of the famous Bible speaker in Israel.

Kaarlo Syväntö was from Finland. He came to the Jewish land before the state of Israel was established. The area at that time belonged to the British mandate. He was one of the first thousand to receive ID cards. It had number 710 in the new state of Israel. Wife and children also became Israeli citizens.

Syväntö was station master on the railway in Tiberias. But he also worked on Bible distribution. To this day, you can send a letter to box 86 in Tiberias and get a Bible. Married couple Kaarlo and Maire Syväntö had two sons with Finnish schooling who did not attend school in Israel, and also two daughters who received schooling in Israel.

Halvor Ronning from the US wanted to study Hebrew in Israel. The teacher was named Mirja Syväntö. In 1969, Ronning married Mirja who speaks fluent Hebrew and has studied Hebrew. They have two sons and two daughters, while two daughters are dead.

Halvor Ronning was born in China and raised in the United States. He went to high school in Chicago. He holds a bachelor’s degree from a Lutheran seminary in Germany and a master’s degree from Yale University, as well as an honorary doctorate.

When asked about family background, he quickly switches to Norwegian. Father was born in Bø, Telemark. Dad was from Rydberg in Nummedal, he says, but says he can’t speak Norwegian.

“I can’t find adjectives to say how much we appreciate this Hebrew study program in Israel. Last night I thanked God for Halvor and Mirja Ronning and their initiative,” says teacher Kokou Ayadome from West Africa Baptist Theological Seminary in the capital city of Togo, Lomé.

He is one of the students studying Hebrew in Jerusalem Center for Bible Translators. He must use the knowledge to train both pastors and Bible translators at West Africa Baptist theological seminars that have students from four countries. The school is also open to other evangelical churches. He will also be of assistance to those who translate the Hebrew texts of the Old Testament in their homeland. Around 740,000 people speak the ife language in Togo. In addition to these, there is talk in Benin and Nigeria. In Togo, there are a total of 40 languages. I suppose maybe five languages ​​have the whole Bible translated into their language. In cities, 80-90 percent speak French, but not necessarily in the villages, says Ayadome.

“The training in Israel is important to most of my students so that
they can translate the Bible into different languages,” says Kokou Ayadome.
The African Hebrew students in Israel have seen the Jordan River, Jericho, Mount Gilboa, the Dead Sea and Qumran, among others.

“We have learned about seasonal issues related to agriculture and those
biblical feasts. It is very important to know how the harvest was when to translate the Bible.”

Kokou Ayadome says that Africa does not have summer and winter like Israel, but dry and wet. Now he sees that the grass can be harvested and stored for food for the animals in dry times. This is something a Bible translator should know about.

In Togo, Christians, Catholics and evangelicals make up about 36 percent of the population. Muslims make up 13 percent, while the largest group is African religious tradition.How is the situation for Christians in Togo?

“We have freedom in Togo. Anyone can practice the religion they want. Evangelism is easy to organize. One can move freely in the country, walk from house to house and preach or start churches.”

Ayadome says evangelism in Muslim areas is not easy. He goes on to say that some Muslims are also influenced by radical ideology.

“African religious tradition (animism) is the largest religion in Togo. It is very strong. Most people in the country are involved in this. The government is supporting their parties in the hope that they will vote for the parties. And the religious say they have the support of the authorities when they send the television to cover their parties.”

Can you see God working in Togo?

“Yes, but not the way we want. From the experience I have from other countries I have visited, God works. Churches are planted, people receive the gospel. But we need pastors with training. Those who speak are without training, and then you can imagine what they are learning. When the people are poor, they can change the gospel into progress theology or a practice that is not too far from African religious tradition. It can be the practice of magic.”

Former Bible School teacher Tormod Engelsviken at the Bible Society’s Bible School in Oslo said many years ago that when he came to Africa, there were magicians who could even throw people into a tree. Is this true?

“Yes it is true. There is much to be practiced,” says Kokou Ayadome very affirmatively.

Kokou Ayadome has a family, wife and three daughters of eight, ages five and two. “I really miss them and they miss me. But I talk to my wife on WhatsApp every day if possible, and with my kids every weekend.”

He arrived in Israel on January 22, 2019, and returned home on July 2 after six months of study.

“There is much to do in Togo, even though the country is not much bigger than Israel.”