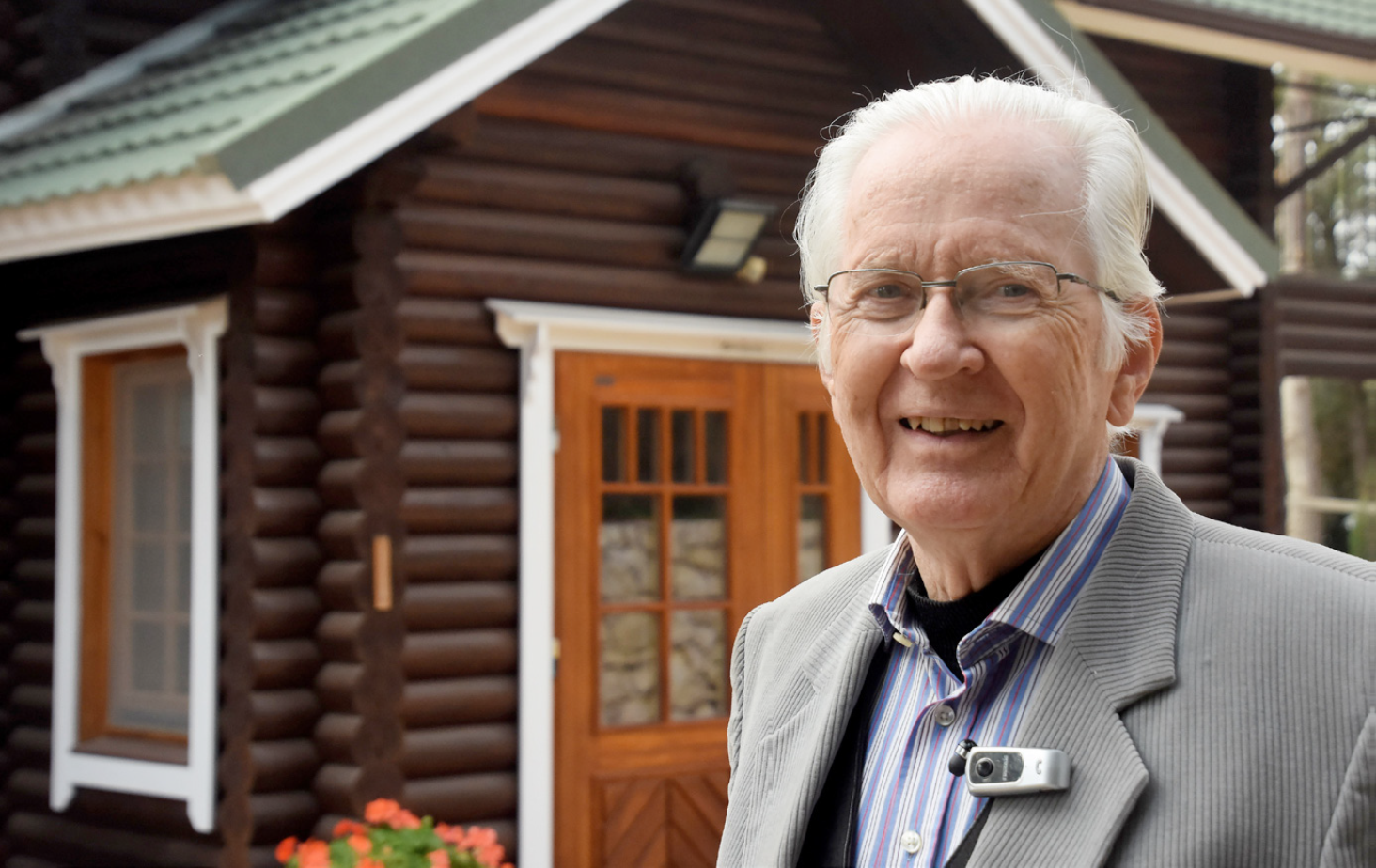 He trains Bible translators in the land of the Bible

JERUSALEM: Norwegian-American Halvor Ronning is convinced that all who translate The Bible, should know Hebrew and geography.

In the Messianic-Jewish village Yad Hashmona, just west of Jerusalem, stands a great timber building in Finnish style. The building is the headquarters of the Jerusalem Center for Bible Translators(JCBT), which has brought since 1995 over 170 Bible translators to Israel. The organization was founded by Norwegian-American Halvor Ronning, and his wife Mirja.

Halvor’s Grandfather was born in Bø, Telemark, while Dad was from Numedal, he says in Norwegian, before switching over to English. Despite his background and the Norwegian-sounding name, he has never learned the Norwegian language properly, except some familiar expressions and practice sentences.“I was born in China and grew up in the United States. My family wanted to quickly integrate into American society, so English was prioritized over Norwegian. It is basically strange that I, who have been involved with language studies my whole life has not learned more Norwegian, but I’ve just been Norway a couple of times”, he says.“Most of JCBT’s supporters live in the United States and Finland, and it’s often where we travel between the semesters in Israel.”

Both Halvor and his wife Mirja were, for a number of years, associated with the Christian educational institution, Institute of Holy Land Studies, which is located on Mount Zion, in Jerusalem. In 1995, they chose to start up on their own. “We had the vision to start a base for Bible translators working on translating God’s word to their own languages”, says Halvor. The couple contacted HebrewUniversity with the hope of a collaboration.“You have programs for foreign students researching in fields of agriculture and medicine, but what do you do for those who will translate the Bible into new languages, we asked.” There are over 6,000 languages ​​in the world but in the ’90s the whole Bible was translated only to a few hundreds of them. The University’s leadership got excited about the Ronnings’ project and initiated a collaboration that continues these days, after 25 years. Today it is an effective study program of one semester, 5 months long. It starts with a one-month course in Modern Hebrew, and the Bible translators are then taught Biblical Hebrew poetry.

“We occasionally participate in international conferences for Bible translators. Most people we meet there, translate the Bible into new languages ​​from English translations, but we think that it is important for all translators to know some Hebrew. That can be invaluable help if one is unsure how something has to be translated”, says Ronning.

Bible translators also need the knowledge of Biblical geography to translate the Bible correctly, and this is the domain of Halvor Ronning. He brings the translators to various Biblical sites and landscapes so that with their own eyes they get to see the places which the Bible speaks about. “The Mount of Olives is usually the first stop. A man or a woman from Nepal or Papua New Guinea will not call this is a mountain, for them this is just a small hill. For Bible translators from Mali or Chad, however, it is considered a high m mountain. By observing the places, they can better choose the right words when they translate the Bible into their native languages”, he says. “Another example is the Kidron Valley, which lies between the Mount of Olives and the Old City of Jerusalem. In some cultures, the most widely used word for “valley” can mean a valley fifty miles wide between two mountain ranges”, and not just a half-mile wide ravine like the Kidron. The Hebrew word “Yam” is used in the Hebrew Bible for rivers, lakes, oceans, ponds and the water basin in the temple of Solomon. This example shows that sometimes it is not enough to have knowledge of Hebrew. One should see the places before translating”, says Ronning.

However, it is JCBT’s desire that the whole Bible is translated, both the Old and the New Testaments. “Organizations like Wycliffe has often concentrated on translating the New Testament. It is a strategy I can to some extent, understand. They want to reach as many as possible, as fast as possible. But it is also problematic. In the NT, reference is often made to OT writings. How are you going to understand God’s plan of salvation is important without the whole Bible”, says Ronning.

has good cooperation with Wycliffe, who has often sponsored translators’ participation at the study programs of the Center in Jerusalem.

Ronning takes us on a tour at the Loghouse at Yad Hashmona.In the basement, there is a library, a classroom, and a chapel. On the main floor is a typical Finnish living room, while on the top floor there are dorms for the Bible translators. It is midway between two semesters and we are the only visitors. But when courses are running, they have a ‘full house’. Then students study, eat & lodge at the Finnish house. When there are lectures at Hebrew University, JCBT arranges for their transportation to and from the University. Many Bible translators come from developing countries and JCBT has had problems with obtaining student visas particularly for those who come from African countries. “We carefully note their travel itineraries to and from Israel, to make sure that all leave and go back safely to their countries as soon as the program finishes”

Halvor Ronning has no regrets that he and his wife have started their own organization. It’s been a project of faith, often with hardly any resources, but the married couple has had great freedom to shape the center the way they want it to be. “It has also made it possible for us to continue to work, while we should have been retired for a long time now”, says Halvor. Now, however, they are keen to associate with both supporters and employees who can lead the work further. “We ask that we get in touch with people who are both passionate about this work as much as we are, and who have the suitable academic background”, says the Norwegian-American in Jerusalem.